How to have productive and calm conversations across the political divide 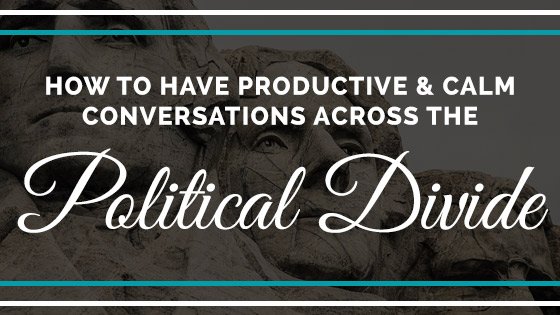 Originally published on Quartz on 10/24/2016 with the title: Yes, it is possible for Trump and Clinton supporters to have productive (and calm) conversations. Though the focus is on the election, the need to understand how our brain sabotages our discourse has only heightened since the inauguration of our 45th president.

The other day, a man I love and respect posted a note on his Facebook page: “Be a real American. Vote for Trump.” An instant social-media war broke out. His sisters and other women in his life rose up in retaliation, demanding that he explain how he could support someone who so clearly and maliciously objectifies women. Somewhere deep in the thread, a liberal friend-of-a-friend commented, “You can’t worry about people who are so clearly broken. Trump supporters like this man just don’t care about women.”

I knew that wasn’t true. This man cares about me, and I’m a woman. He loves his wife. He supports his daughters. So how, I asked myself, could he support a blatant misogynist?

As a cognitive psychologist, I have spent the past decade studying how people can effectively engage with those who disagree with them. I’ve studied the arguments of adolescents, college students, lawyers and scientists to learn the best ways to engage with people who stand opposite you on issues of social importance. As we come to the close of one of the most toxic presidential campaigns in US history, I believe it’s time to seriously reflect on how divided Americans can learn to live with each other—both in the heated days before the election, and after the results are in.

To understand how so many Americans can experience the same campaigns and emerge with vastly different opinions, it’s important to understand a phenomenon that psychologists call “confirmation bias.” Our brains are bombarded every day with far more information than we could ever effectively attend to. In order to impose order and cut through the confusion, our brains search out facts and ideas we already believe, seeking to use that familiar ground build further knowledge. So when we watch a presidential debate or read about Hillary Clinton’s leaked emails, we are scanning for confirmation of our pre-existing opinions and beliefs, not questioning them.

This means that two people—say, a Clinton supporter and a Trump supporter—can read the exact same article and take away completely opposite messages. This happens to everyone: highly intelligent and well-educated people are just as prone to confirmation bias as the rest of us.

Not only does confirmation bias drive us to interpret news in a biased way, it also drives us to seek out sources that support our beliefs and block those that do not. This is a primary cause of the so called “echo chamber” that most of us experience in our social media feeds. These echo chambers form when we are only exposed to the perspective of people who think, feel and believe as we do. Ideas reverberate and amplify until it feels as though “everyone” is actually in agreement with you.

This is referred to as the “false consensus effect,” and it can lead to the belief that one’s own perspective is “normal” and the opposing side is simply a fringe group holding an extreme view. It also leads to the outrage and indignation that pours forth whenever Clinton and Trump supporters clash online. When we believe that “everyone” is on our side, we are emboldened to speak harshly and unequivocally. Our echo chamber cheers us on, while our “opponents” echo chamber cheers them on. It’s no wonder that people declare that the other side are “idiots,” “stupid,” and “clearly broken.”

In the best of circumstances, these cognitive biases can be managed pretty effectively. But the 2016 election is deeply personal for many Americans. Some people in the Midwest, hit hard by the loss of manufacturing jobs, believe that Hilary Clinton’s family is personally responsible for that loss of stability. Meanwhile, many women, Latinos, Muslims and other minority groups sincerely fear for their futures under a Trump presidency. Under such circumstances, people feel personally attacked when they encounter those who disagree with them—and research shows that when we feel personally attacked, we respond by further polarizing our positions and retreating more deeply into our echo chamber.

Certainly, these responses make it almost impossible to see the candidates objectively and evaluate their policy positions with any kind of nuance. But much more troubling than our opinion of these candidates, I believe, is our crumbling opinion of each other. Last summer, the Pew Research Center found that more Americans than ever before are afraid of and angry with members of the other party.

The truth is there is no “basket of deplorables.” There is no legion of brainwashed idiots. The people on the other side are people with real problems in need of real solutions. And so, despite the genuine hurt and anger that many of us feel when we think about the opposite political camp, we need to learn to see each other more clearly—to move beyond our cognitive biases and fearful entrenchment.

Don’t avoid the other side—seek them out

First, don’t unfriend or walk away from people who disagree with you. The echo chamber that we create when we only surround ourselves with people who think like us has a terrible impact on our critical judgment. Alex Pentland, head of the MIT connection science lab, has shown that when people rely on their echo chamber for advice, they make less informed decisions that result in worse outcomes. Keeping connected to people who disagree with us not only preserves our friendships, it could lead to better solutions for our most intransigent political problems.

Connect on a personal level

Next, when you encounter someone who disagrees with you, don’t go straight to a discussion of Trump’s alleged sexual assaults or Clinton’s record on free trade. Instead, ask the other person about their lives. Learn about their hobbies, their families, their jobs, the movies they watch and their favorite restaurants in town. Find some things in common. Cultivation theory shows that people will believe what they hear in the media until they have personal experience that counters those messages. Getting to know people on a personal level who disagree with you on a political level will make it much harder to write them off as “liberal idiots” or “desperate Republicans.”

Seek to understand, not persuade

Lastly, don’t avoid talking politics—just go about it with a different goal in mind. My colleague and I have found that when people who generally disagree on an issue are asked to to find specific points about which they do agree, the conversation completely changes. People begin to build on each other’s ideas, often collaboratively creating a third position that draws from the best of their two original positions. Plus, when talking about politics stops being about persuasion, both parties become more effective and sophisticated at representing their own position. This means that you learn more about your own beliefs when you engage with those who hold opposing positions.

When you are talking politics, get the other person to clarify their views and ask them questions. If you’re a Clinton supporter and you’re talking to a woman who plans to vote for Trump, ask her to elaborate on her worries about border security. Ask for stories and supporting evidence, but don’t take a hostile stance. Assume that at the root of every belief—no matter how outlandish it seems to you—is a reasonable concern or problem. Make it your business to find it.

On a personal level, I understand the temptation to give into anger, resentment and despair this election cycle. But there’s no denying that regardless of the outcome, a large portion of Americans are going to be unhappy when they wake up to election results on Nov. 9. If we want to address the schisms that are eating away at American democracy, people throughout the country need to find a way to get to know each other again.