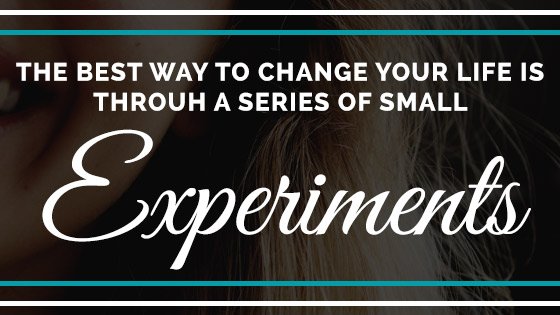 During my 20s, I didn’t give much thought to money. I was in grad school for a long time—seven years total between my masters and PhD—and I assumed my finances would straighten out once I graduated and got a job in the real world.

Shortly after I settled into my new job, my student loans came due, and I realized that I was really no less broke then I’d been in grad school. It was a wake-up call. My family needed a budget, and we needed one now.

Fortunately, I’ve been working as a change consultant for a few years —so I knew that at the heart of big changes are small experiments. Whenever you see difficult changes handled well, whether in health care, manufacturing, or business, it’s because the overhaul was managed through very small changes that were carefully monitored. Along with other insights from design thinking, improvement science, and psychological research, this helped me tackle my personal budgeting. The same tips can help you make a positive change, whether it’s exercising more, embarking on a new career path, or finally organizing your apartment.

My husband and I decided to follow the budgeting program outlined in Dave Ramsey’s Total Money Makeover. The first step in the program is to save $1,000 as fast as you can. As great as that idea sounded, there wasn’t much guidance on exactly how we were going to get there. He couldn’t tell me exactly how to save that money because the same change doesn’t unfold in the same way for everyone. In order for a change to really take root, it has to grow along the contours of your particular life.

As I looked at my buying patterns, it was clear to me that I was spending too much money in restaurants and coffee shops. I knew I had to cut down in those areas, but I had to figure out exactly how to do that myself—which required embarking on a series of small experiments.

To tackle your personal improvement efforts through small experiments, you need to understand a few things:

1. Remember that Change Happens in Moments

Sometimes we think that big problems—like being deep in credit-card debt or struggling in a romantic relationship—require a sweeping, singular solution. This is the wrong way to think about change. Even the biggest problems are the accumulated effect of many small decisions and moments that have gone the wrong way. To fix the problem, you need to focus on the seemingly minor, everyday choices that are creating your current reality.

For example, when I decided to adopt a budget, I had to address lots of little moments in everyday life when I could either spend or save. The first step was to identify those moments—say, a crazy morning when making lunch was the last thing on my mind—and find ways to handle them.

Even the biggest problems are the accumulated effect of many small decisions and moments that have gone the wrong way.

Since I knew that I was most tempted to forego a packed lunch when I was rushing to get out the door in the morning, I experimented with different ways to pack my lunch ahead of time. I tried making them the night before, but I found that I was too exhausted at the end of a long day. Then I tried getting up at 5 am to give myself plenty of extra time in the morning, but found that wakeup time grueling. I tried eating only frozen meals and pre-packaged food (gross). Eventually, I settled on making a specific lunch plan for the week ahead of time and trying to prepare the basics on Sundays. Each of these experiments allowed me to try handling a specific, challenging moment in a different way. Which brings me to my second point:

By experimenting with different possible solutions, we can discover the best ways to change our habits. So it’s important not to overcommit to a new idea until you know that it works.

For example, I was very sure that taking my coffee to work with me in disposable cups was going to be the solution to my caffeine-spending problem. In fact, I was so sure that I bought roughly a metric ton of disposable cups at Costco—a strong commitment if ever there was one.

The disposable cups did not work. First of all, my coffee got cold really quickly, especially in the winter. Then I felt really guilty throwing the disposable cups away—it would have made a lot more sense for me to give the idea a test run before purchasing a lifetime supply of guilt-inducing cups. I also tried inexpensive, reusable cups, but they leaked in my bag and weren’t much better at keeping the coffee hot.

When you are getting started on a goal, don’t make a huge commitment. Find a way to try it out first.

The eureka moment came when I found what I call my “Hot-Shot Thermos.” A friend of mine had one of these thermoses—the sturdy kind that construction workers use—and lent it to me to try out. It turns out that it keeps coffee amazingly hot and delicious seven hours later, even in the freezing cold. Bonus: the lid screwed on so tightly that I could carry it inside my bag with zero worry about leaking. Victory!

Learn from my mistakes: when you are getting started on a goal, don’t make a huge commitment. Find a way to try it out first. If you want to start exercising more, definitely ask for a guest pass at a gym before you decide to spend $100 a month. If you’re thinking about pursuing a graduate degree, drop in on a few classes at a local school before you spend a lot of time and money on applications—just in case it turns out that, say, landscape architecture isn’t as glamorous as you’d hoped.

It’s not possible to adopt a new habit or achieve a goal without encountering a healthy dose of failure along the way. If you can do something perfectly, you already know how to do it, right? But don’t forget—there are two kinds of failure: the productive kind and the defensive kind.

Defensive failure is what’s happening when you vow to go on a diet or start job hunting week after week and never, ever make any progress. In your heart of hearts, you don’t really think you can do it, or you just think you should do it, or you don’t believe that “people like you” do things like this. If you find that you just can’t get started on a particular project or making a certain change, even though you really want to, you should read this article about getting in the right mindset.

Productive failure, by contrast, is what we all encounter when we are committed to a given goal and are taking action to try to achieve it. Whether you’re attempting to wake up early to exercise three times a week or working hard to make more friends in a new city, every attempt is going to have elements of both success and failure.

The critical work is to identify what you’re doing that’s leading to success and stick with it, while also continuing to experiment with the pieces that aren’t working yet. The scientists among you will recognize this as the essential core of the scientific method.

When you are learning your way into a new way of being, don’t be discouraged when things go sideways.

I had my own bout of productive failure on the second step of Dave’s program—the debt snowball, where the goal is to spend every dime you can on paying off your debt. I’d always justified credit cards as important tools for handling emergencies. By looking at my credit card usage, I’d come to realize that debt was actually creating the emergency, not getting me out of it.

Even though I was very committed to paying off my credit cards, I still slipped. One month, things got out of hand and I fell back into my old “emergency” habits and ran my almost-paid-off credit card back up. I was so disappointed that I might have cried. Okay, I did cry. But then I got back to my small experiments. It was a lot easier to keep things on track the second (and third, and fourth) time.

When you are learning your way into a new way of being, don’t be discouraged when things go sideways. That’s to be expected. Successfully transforming your life in small and large ways will require that you see failure for what it is—the stepping stone to sustainable success.

We’ve been working our way through the Dave Ramsey program now for a couple of years. We are spending less money than we make, are down from four credit cards to just one, and have begun to contribute 10% to both of our 401(k)s. It has been a bumpy ride; bad habits are hard to break. But by finding the moments at the root of the problem, keeping changes really small, and expecting to make a ton of rookie mistakes, we’ve been able to keep with it and make real progress.